Tiger Woods nowhere near a return to golf 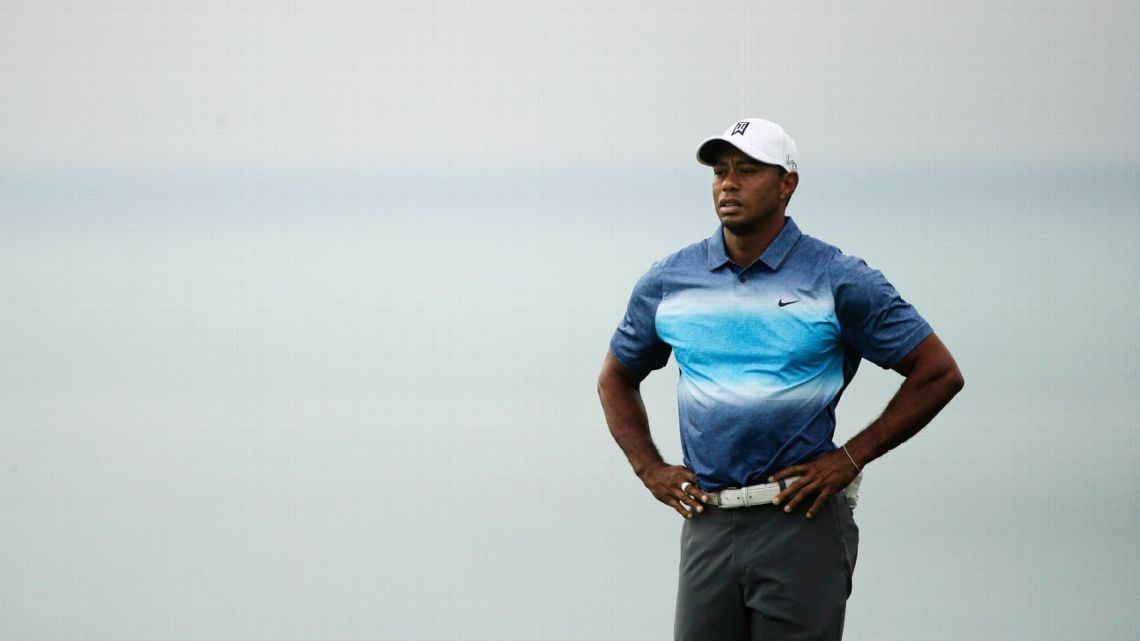 NASSAU, Bahamas -- Tiger Woods has a home here at Albany Golf Club. His yacht is anchored nearby at the marina. His two kids are scheduled to join him here this week at the Hero World Challenge, where he won't be playing golf but will serve as host for his tournament.
Other than that, there is little Woods can do anyway.

He would dearly love to join the 18 players competing in the annual tournament that benefits his foundation, the one that he's captured five times and as recently as two years ago lost in a playoff.
But from listening to him Tuesday during a news conference and later watching him gingerly make his way into a room to talk with a couple of reporters, Woods' immediate goals are far more modest.
He had little information to offer about his golf future, and yet that alone said so much.

"There's nothing like being able to interact with my kids," Woods said. "I hope I can do that soon."
Woods is still hurting from the second of two back procedures performed in the last two and half months. That makes for three such procedures -- called a microdiscectomy to deal with disc issues -- in the last 18 months.

Forget about golf in the short term. This is about quality of life. Woods is about to turn 40, an age at which competitive golf might be an issue but not kicking a soccer ball or going scuba diving.
"I'm just generally sore due to inactivity," Woods said. "It's a real test of my patience and my resolve. It's been hard. No doubt about it. In order to get better, you have to do nothing."

Woods smiled and laughed often during his news conference, his role as host of his annual tournament all but requiring it. He thanked Hero for its sponsorship. Lauded the field assembled,

including No. 1 Jordan Spieth, the defending champion as well as 11 of the top 20 in the world. And reminisced about the day he and his late father, Earl, dreamed of starting a foundation and subsequently a tournament.

But when talk turned to his own game, his own future in it, the mood turned somber, pessimistic. Woods has always been positive about his return from injuries, but he painted a dire picture this time.
"The hardest part for me is there's really nothing I can look forward to, nothing I can build towards," Woods said. "Where's the light at the end of the tunnel?"

There have been more than a few who have surmised in recent months that Woods' run as one of the all-time greats in the game is complete, that his numerous injury issues have finally put an end to his pursuit of Jack Nicklaus' 18 major championship record or even winning period.
The fact that Woods engaged in that very topic was telling.

"I think pretty much everything beyond this will be gravy," he said. "I've passed Jack on the all-time win list (79 to 73), just shy of Sam (Snead, 82). I passed Sam basically a decade ago (and everyone else) in major championships but I'm still shy of Jack's. So I've had a pretty good career for my 20s and 30s. For my 20 years out here, I think I've achieved a lot, and if that's all it entails, then I've had a pretty good run.
"But I'm hoping that's not it. I'm hoping that I can get back out here and compete against these guys. I really do miss it. But if that's not the case anymore, then I'll find other avenues, that being growing my foundation, golf course design and other projects I have going on right now that will certainly take up more of my time."

Stunning, really. Woods has never talked so bluntly, so solemnly, about the possibility of having hoisted his last trophy, about never playing golf at a high level again
.
And perhaps he knows it's over, that trying to compete with the likes of Spieth and Jason Day and Rory McIlroy and Rickie Fowler and Dustin Johnson and all manner of highly-skilled players is a tall task for someone who can barely walk, let alone put in the time necessary to play a game that requires so much preparation.

Woods in no way shut the door on such a scenario, but it is clear he is in not in a rush to return as he was in 2014 when he came back from the first microdiscectomy in less than three months.


"The hardest part for me is there's really nothing I can look forward to, nothing I can build towards. Where's the light at the end of the tunnel?"
Tiger Woods

Woods said he has no choice but to wait this time, as a third procedure in October meant it would be impossible to speed up a timetable that he said does not exist. When he first had the surgery on March 31, 2014, Woods later explained that he felt immediate relief from the issues that had been troubling. You don't get that sense now, as he struggles to settle into a chair and get his legs off the ground.

It was almost eerie to hear Woods speak about Kobe Bryant, who on Sunday announced that this would be his last season in the NBA.

"You add up all those games, it takes a toll on the body and eventually it just doesn't heal any more," Woods said. "It's been tough to watch him go through the season he's had, and understandably so."
The same could be said for Woods, who endured his worst season as a pro, and yet held out hope that his tie for 10th at the Wyndham Championship in August was the beginning of his turnaround.
Three weeks later, he was having surgery again, has yet to hit a meaningful shot and doesn't know when he will.

Woods spoke glowingly about being able to play soccer with his kids, toss a ball around, do the simple tasks.

"But I just can't bend over that well or I'm not athletic to be able to do those things," he said. "I would like to be able to get to that first. If I can get to that, when we can start talking about golf."
That conversation would appear to be a long way off.