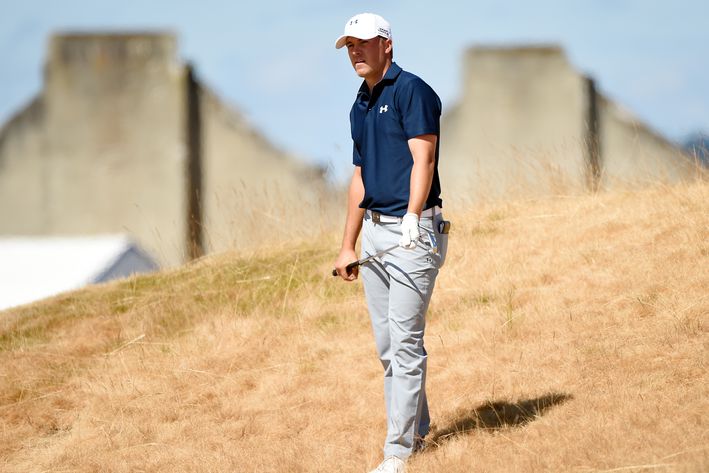 You know Jordan Spieth has made it into the pantheon of PGA Tour superstars when his whining about course setup forces the powers-that-be to cave into his demands.
In this case, Spieth complaining on Friday to an open Fox Sports mic for the world to hear that No. 18 as a par-4 at Chambers Bay was "the dumbest hole I’ve ever played" definitely had an impact on USGA executive director Mike Davis’ decision to play the 72nd hole of the U.S. Open as a par-5.
The expectation was that the hole would play as a par-5 on Thursday and Saturday, and as a par-4 on Friday and Sunday. After his third round, Spieth was asked about the likely par-4 finish on Sunday. He reiterated his distaste for the move and said one option he was exploring was playing it up the adjacent 1st fairway. That was another preemptive power move, because surely the USGA did not want one of its leaders and possible champion playing the final hole of its most prestigious championship up another fairway because of the setup.
"If you don’t think that players have any sort of influence over course setup, this is a perfect example where a player has voiced his discontent with a particular hole and how it’s been set up and I think the USGA has responded, amidst all of the scrutiny and criticism that golf course and the setup has endured this week from both players and the media," Notah Begay said Sunday morning on Golf Channel’s Morning Drive.
Shades of Phil Mickelson at Muirfield, where Lefty’s harping about the greens reached the ears of the R&A? We know what happened there.
Begay was responding to colleague Tim Rosaforte’s report that Davis denied the move was in reaction to Jordan’s comments. Davis, instead, claimed the change came because of a weather forecast that called for a left-to-right crosswind on the hole that could decide the winner of the national championship
While one would be hard pressed to find any golf watcher to believe that, there’s little doubt that the change works in the reigning Master champ’s favor.
"This is a huge break, I believe, for Jordan Spieth," Mark Rolfing said on the GC morning show. "He has had that 18th hole on his mind all week long. He’s been the most vocal about it not being a good par-4. He even told [Golf Channel’s] Steve Sands yesterday that he was glad he wasn’t in the final group because if it was playing as a par-4 he could go post a score.
"He had all these thoughts going on about it," Rolfing added. "Now he can forget about the 18th hole and play 17 holes before he gets there and then worry about 18." Past U.S. Open winner Graeme McDowell concurred.
Source: http://www.sbnation.com/